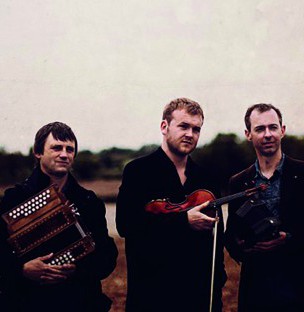 The Leveret in English

English folk music
Leveret is like a young hare. The same way that they can run through a field with unexpected odd turns, this trio is moving through the English folk music tradition. In The Leveret the sublime qualities of Andy Cutting, Sam Sweeney and Rob Harbron come together: instrumental craftsmanship with a big dose of creativity. The trio does not work with coordinated arrangements, but plays traditional and new tunes and lets an arrangement originate while improvising, without losing sight of the tradition. It makes their performances interesting and exciting.

Andy Cutting (accordion) is part of the band Blowzabella and has worked with all the major names of the British folk scene. Violinist Sam Sweeney is one of the members of the famous Bellowhead, the English folk big band which already performed twice in a sold-out Oosterpoort. Rob Harbron has given a new dimension to playing the English concertina. Amongst others, he plays with The English Acoustic Collective and with Jon Boden, Bellowhead’s singer.

“It is such a refreshing album, its honesty and simplicity serve to underscore the feeling that you don’t have to package trad folk up in some high concept, worthy historical garb. More please.”

“Remarkably, it was recorded in just one day, with the three artists working spontaneously rather than following arrangements, and the result is an elegant, sophisticated set.”