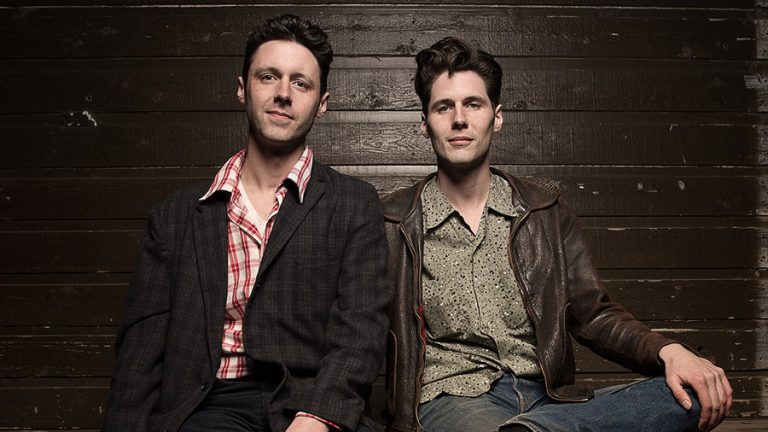 “”Powder Blue,” off their recently-released LP You’re Dreaming, is an ode to wistful romance harkening back to an era where courtship was set to the slow strum of acoustics and not just swiping right. ” – Marissa R. Moss (Rolling Stone, 2016)

With their 2016 Red House debut, You’re Dreaming, The Cactus Blossoms appeared seemingly from nowhere, garnering comparisons
to classic sibling duos. Born and raised in the working-class neighborhood of “Nordeast” Minneapolis, brothers Jack Torrey and Page Burkhum found
themselves drawn to classic folk and country music, honing their songwriting skills with weekly gigs at former country 1940s honkytonk (and now music
club) The Turf Club in St. Paul, MN. With the kind of blood harmonies that make your scalp tingle, the brothers made the genre their own and started
working originals into their weekly sets of classics; people couldn’t tell the difference. A chance gig opening for JD McPherson brought him on
board as a fan — he is the producer behind You’re Dreaming.

Though they came from a musical family, they didn’t naturally inherit their deep understanding of early American music. By tracing their heroes’ footsteps
back to the roots, they came into their style in a very genuine way. By absorbing these musical discoveries, a natural alchemy took place and what transpired is the tasteful rejuvenation and transformation of a retro sound by a modern duo. With press ranging from a Rolling Stone “Artist to Watch,” NPR Heavy Rotation, NPR All Things Considered, Folk Alley, Noisey, Garden & Gun, CMT, A Prairie Home Companion and much more, the brothers have brought a breath of fresh air and vitality to the roots music scene.