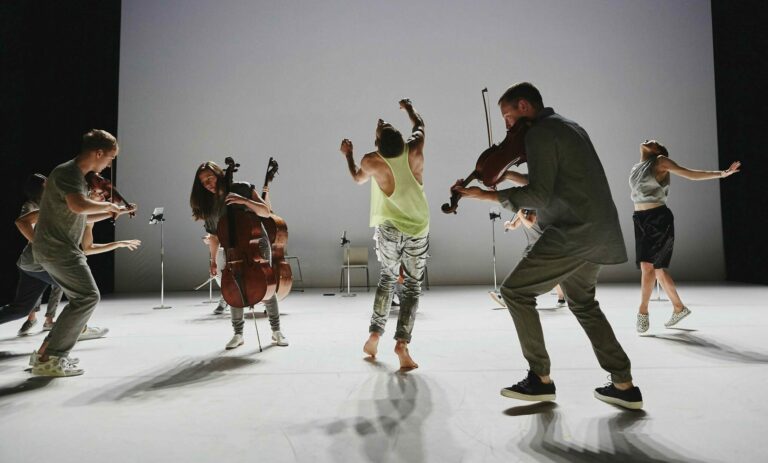 “A revelation on several levels. Please, everyone, play it again. Soon.”
The Herald ★★★★★

“I find myself having to sit with one of those happy smiles through the show and I realise that it is precisely this type of visual setting that people like me, a dance geek, usually miss when I go to classical concerts. Örjan Andersson manages to blend the best of both worlds – this is like an animated Bach Concerto.”
Sveriges Radio

In Goldberg Variations – ternary patterns for insomnia, the Scottish Ensemble and the Swedish Andersson Dance merge one of Bach’s most beloved musical compositions with dance. Choreographer Örjan Andersson created a 21st-century version of the timeless masterpiece.

Dancers play, musicians move, everyone is part of the choreography. It makes all the nuances in the layered music stand out. Are you watching a concert? Or are you listening to dance? Bach wrote the work for pianoforte, but there are also beautiful arrangements for other instruments. In this program you will hear the world-famous version for strings by violinist Alexander Sitkovetsky.

Bach’s Goldberg Variations
Johann Sebastian Bach wrote his Goldberg Variations around 1740, allegedly as soothing music for a count suffering from insomnia. The piece is said to owe its name to harpsichordist Johann Gottlieb Goldberg, who had to play the piece during the night. These days, there are many doubts concerning that origin story, but as a tale, it is certainly appealing. And it has to be said: a gratifying feeling of calm emanates from the work. The piece opens with an instrumental aria, followed by thirty variations, after which the aria is repeated at the end. The Goldberg Variations have been put on record many times. The two recordings made by Canadian pianist Glenn Gould – in 1955 and in 1982 – are perhaps the most well-known.