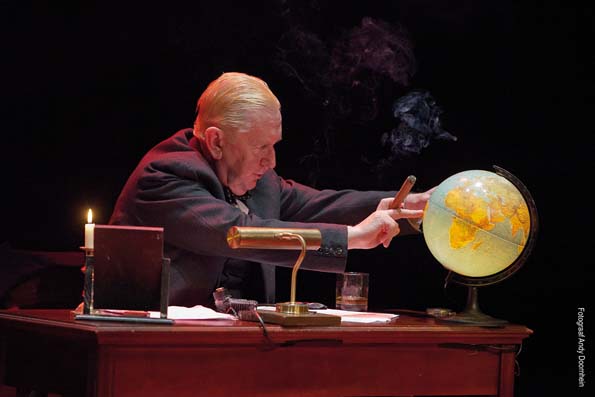 “This is a tremendous show beautifully performed and should not be missed. Highly recommended.”

“It is indeed a magical hour, and one of Utton’s finest.”

“Utton’s delivery is remarkable, catching Churchill’s unique intonation and rhythms without resorting to caricature and, unfair though it is to say, he looks quite like Churchill, too.”

“All men are worms. I believe I am a glow worm!”
Big Ben chimes and strikes 13; a magical time when once a year for just over an hour the statues of the great statesmen in Parliament Square, London, England, come alive again. Winston Churchill descends from his plinth to indulge himself in three of his greatest pleasures: a glass of Scotch, a cigar and listening to himself talk.
He talks of his childhood, his parents, his education, his army life, his marriage, his painting, writing and bricklaying, his appetites and, of course, he talks of his many years at the centre of the world political stage especially during two world wars.