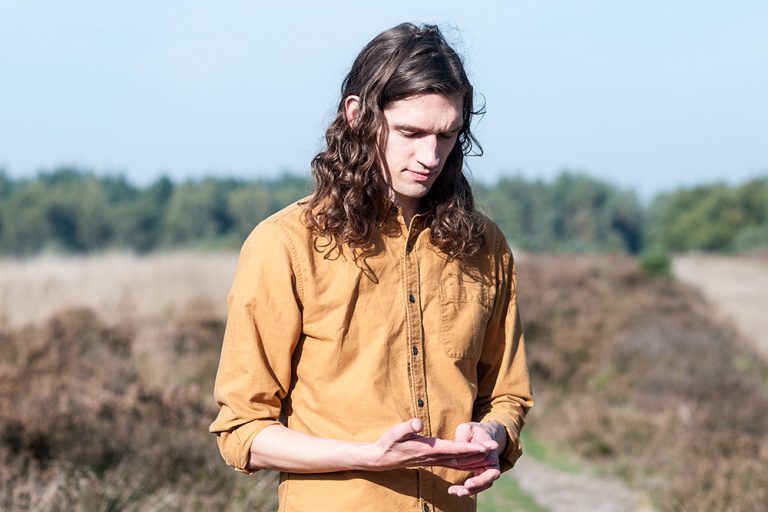 I Am Oak
After three albums and a few singles and EPs in the first three years of I Am Oak and a new approach to old material (Ols Songd), I Am Oak’s Thijs Kuijken took time to write new songs for a fifth album: OUR BLOOD. It contains the first new I Am Oak tracks since the 2012 Nowhere or Tammensaari. Starting as acoustic guitar songs, Kuijken carefully built these tracks layer by layer, which made them change along with Kuijken during his times in different home cities – Utrecht, Paris, Bremen – and the long train journeys between them. This slow process of making the album took place synchronically with processing a personal loss, which became the theme of the album. Kuijken explains: “The album is about seeing a loss come nearer and nearer, experiencing it, being confused by it and then processing it. The album explores how death – of a relationship or a body – is part of life and how it can transcend grief.” This album OUR BLOOD helps to deal with grief, and helps to realise that it can be the starting point of something new and positive. It is about knowing that after a night a day will come, but after this day comes a night again.

Pitou
The music of songwriter and singer Pitou, from Amsterdam, is characterised by her striking voice, special compositions and the use of vocal harmonies as a musical instrument in itself – a sound that is realised live by the backing vocalists’ support. In her timeless, aesthetic style, often compared to singers as Vashti Bunyan, Joanna Newsome, Laura Marling and Alela Diane, Pitou hints at her background in classical, folk and world music. Last year Pitou won the pop song competition ‘Mooie Noten’, this year she, among other venues, played Paradiso and festivals as Valkhof, Grasnapolsky, Noorderzon and Amsterdam Woods. Her long-awaited debut album was released in a sold-out Vondelkerk on 8 September 2016, on 10″ vinyl and CD by the Scottish/Dutch label Mink Records. Shortly after the release songs by Pitou were picked up by music blogs here and abroad, Noisey called the album ‘one of the most important releases of the last weeks’, and her track ‘Fool’ was featured in Apple Music’s worldwide ‘Breaking Singer-songwriter’ list. This autumn Pitou is touring the country with the Popronde, for which she was awarded with the title 3voor12 talent. For early 2017 she has, among others, planned a UK tour and the release of two audiovisual projects in cooperation with promising young film makers.