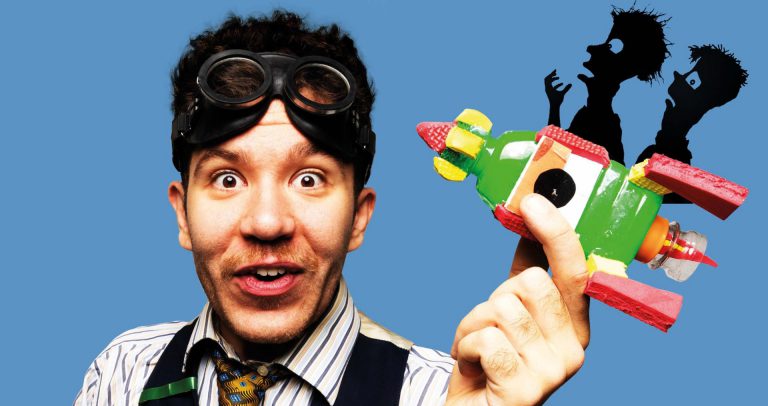 With a mix of improvisation, comedy, and shadow theatre, the Australian Bunk Puppets’ shadow puppeteers entertain young and old around the world: everyone enjoys the creativity, sympathises with the characters, and laughs about the humour.

‘Slapdash Galaxy’ is about Sam and Junior and their search for their father. They travel the cosmos in their space ship, encountering giants and spine-chilling spiders. With the trash spread around the stage they create an energetic and funny shadow play. From pieces of cardboard, balloons, sticks, tubes, streamers and so on, the group conjures up a staggering lo-fi universe.

The journey of Sam and Junior

Two brothers, Sam and Junior, live on a planet that is ravaged by war and has no more resources. Their mother decides to send them off in a rocket ship to travel across the galaxy, and to meet up with them later in a place called the Pearl Galaxy. She warns them to be careful about celestial monsters, and space pirates.

The two brothers travel alone together in their small spaceship. Junior is worried about the trip ahead, and always getting into trouble by touching the space ship controls. When they get stuck in space, Sam puts on a space suit and tries to free the ship. Junior carries a fish in a bottle, that he believes has special magic powers- and he puts them to use when Sam gets in trouble. After battling pirates, their journey takes them to the Pearl Galaxy, where they meet their mother again, and make a new home.