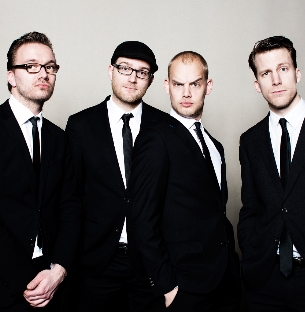 The sound of BRUUT! originated at the start of their first joint performance. As trained full blood jazz musicians they were announced as ‘jazz band’ (not done in the jazz world). They were able to create every vibe, but the public simply expected a very swinging, steaming and loud band. Et voilá, that is what BRUUT! gave them.

BRUUT! makes ‘super jazz’, as they say themselves. A group of jazz musicians that defy all the rules within traditional jazz. BRUUT! swings and is unpolished, festive, colourful and danceable. They have already performed in Japan, Poland, South-Africa, Germany and England and on festivals such as North Sea Jazz, Noorderslag and the Uitmarkt. Also, two BRUUT! albums were released, with the well-received ‘Fire’ (2013) as the most recent.