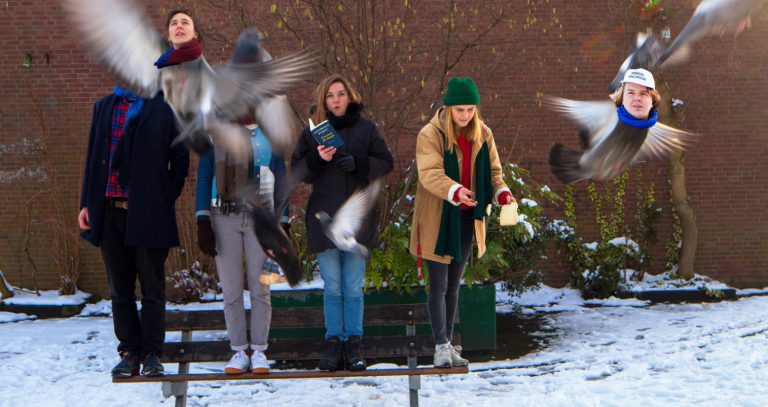 BOG. is a collective of four theatre makers: Judith de Joode, Benjamin Moen, Lisa Verbelen and Sanne Vanderbruggen. BOG. is driven by the longing for an overview, for naming, folding out, zooming out, rearranging, categorizing and summarizing of all the things that we humans try to capture but are too big to grasp, like life, opinions, believing, consciousness and change. BOG. was founded in 2013 and named after their first performance ‘BOG. An attempt at restructuring life (2013).’ On Saturday the 13th of May they will perform this first performance in English.

‘BOG.’ comes from the Dutch word boog, which can be translated as arc. It refers to creating a cycle, an overall picture of all of human life. In the performance the collective tries to restructure life by zooming out on the complex diversity of existence. Sighing in gratification at the idea of an overview. Like when, in a plane taking off, suddenly you recognise the structure of the chaotic city. ‘BOG.’ searches for the blueprint of the “thing” that later will be called your life.

———
This performance is part of the BOG.WOG.050. A week full of BOG. During this week the artists of BOG. will play almost all of their performances (ONE. on wednesday, MEN. on thursday, GOD. on friday and the English version of BOG. on saturday), they will invite musicians and speakers, they will show unfinished work and there will be an exhibition of images collected by road makers.