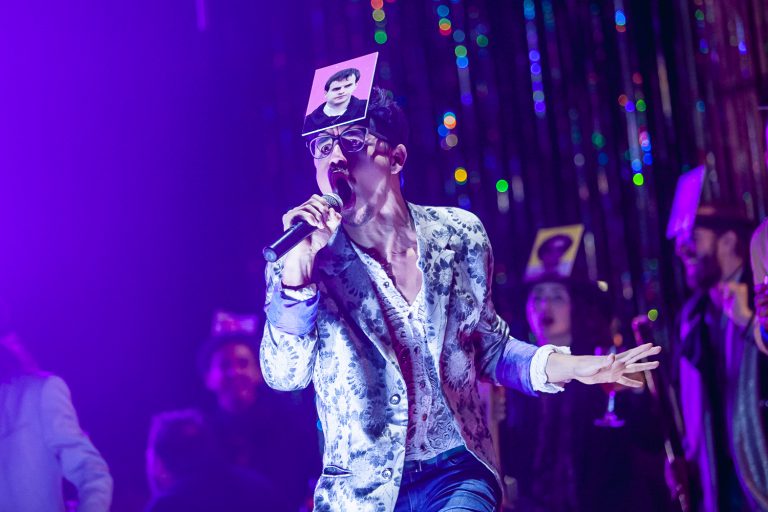 Chilean Teatro La Re-Sentida was one of the hits of Noorderzon Festival 2015 and was rewarded with a 5-star review in newspaper Dagblad van het Noorden. The group creates very special theatre: inspired, concerned, humorous, and energetic. Its most recent project is an exuberant satire aimed at the Chilean cultural elite. A sparkling story acquaints us with a few well-to-do people during a pool party that is slowly going off the rails. It is the story of a self-satisfied upper class. They were left-wing and politically involved once, but slipped down to an amoral bourgeoisie that seems to have retreated in their own social bubble. This is a phenomenon that seems to be developing more and more in the West.

“It is not often you see so much movement in text-based theatre. What a pace. What a performance. What a courage.” (Newspaper Dagblad van het Noorden***** about their previous performance ‘La Imaginaciön del Futuro’)

In the piece we meet some of them at a slowly derailing pool party. A spoiled upper class that seems to have retracted into its own bubble. La Dictatura de lo Cool is a stimulating provocation in the tradition of Molière and Houellebecq, a musically exciting and technically impressive show that sparks the sparks. La dictadura de lo cool is a raucous social satire reflecting on art, culture and contemporary lifestyles. The show is set on the 1st of May, as Santiago’s cultural and artistically elite gather to celebrate the new Minister of Culture. As the streets pulse with the ambiance of protest, the Minister realizes the hypocrisy and inefficiency of bourgeois culture and renounces capitalism and greed, turning the celebration into a nightmare.

La Re-sentida is a collective of young activists and artists from the Chilean national theatrical scene who regard theater as a critical instrument with major political responsibility. Their work embodies the pulses, visions and ideas of their generation and assumes as duty, audacity, the desecration of taboos and reflection generated from provocation. Their works give theatrical creation great political responsibility, understanding it as an instrument of critique, reflection and construction. Their works have been performed in more than 17 countries.