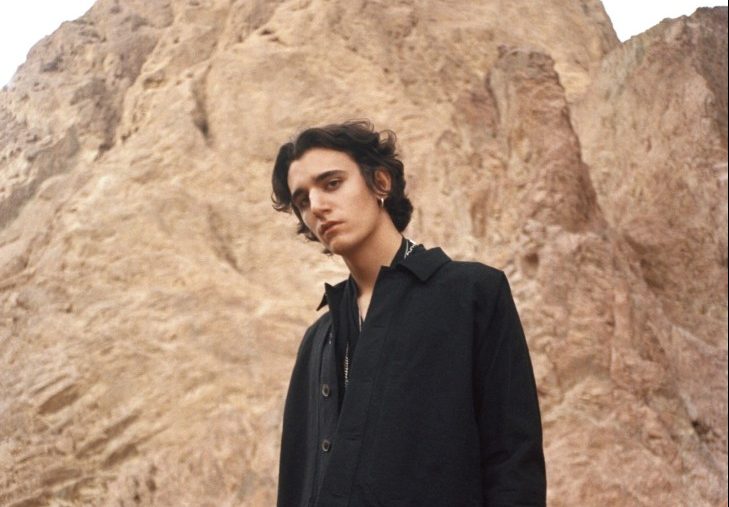 Tamino is a singer, guitarist, and pianist from Antwerp who studied at the conservatory in Amsterdam until last year. But after the rocket launch of his career in his home country, he was not able to combine his work with his studies. He decided to focus on his career as an artist completely and that choice yields rich rewards. On Friday 1 March, the Fleming climbs on the stage of the De Oosterpoort.

Egyptian roots
The 21-year-old singer-songwriter is from a family of creative minds. He is grandson of the famous Egyptian singer Moharam Fouad, who is a very well-known singer and actor in the Arabic world. These influences with expressive compositions and elements of Arabic music all resound in Tamino’s repertoire, resulting in frighteningly beautiful music.

Tension between romanticism and nihilism
Tamino views his ominous music as an area of tension between romanticism and nihilism. “That nihilism consists of looking at life and thinking: ‘What the fuck?’ When you zoom out and read about how small we are, such a small planet in such a huge universe, and even then we are making life difficult for each other. When I think about that, nothing seems beautiful anymore. But the perspective changes. Daily, hourly. When you look at it more simply, you see wonderful things, as love. That makes me realise that it does not matter that life makes no sense. That is my romantic side.” (National newspaper NRC)

Amir
On Friday 19 October his first debut album Amir will be released. This album starts with the wonderful Habibi and the previous single Indigo Night, with Radiohead’s Colin Greenwood on bass, is on the album too. Amir is about searching for a balance between the romanticism and nihilism described above.

Tamino’s career has only just started, but already is an express train of success. He says about his work: “The Dutch are talkative, but I now have often managed to silence them with my music.” (NRC) We cannot wait for this silence to reach De Oosterpoort.

Support: The Visual
Deep layers, an impressive voice, and poetic songs. The Visual is a band from Amsterdam consisting of songwriter Anna van Rij, keyboardist Timon Persoon, and drummer Tim van Oosten. The band plays songs that are founded on atmosphere and silence as much as on a fine melody, with Van Rij’s expressive voice at the absolute centre of attention. In a fluid way she switches from warm to cold; sometimes full of yearning and desire, but on the other hand supercool and gloomy. Without being afraid to experiment, The Visual demolishes set ideas about identity, inclination, and human relations. Get carried away with The Visual’s melancholic vibes. This band is support act at Tamino’s concert on Friday 1 March.