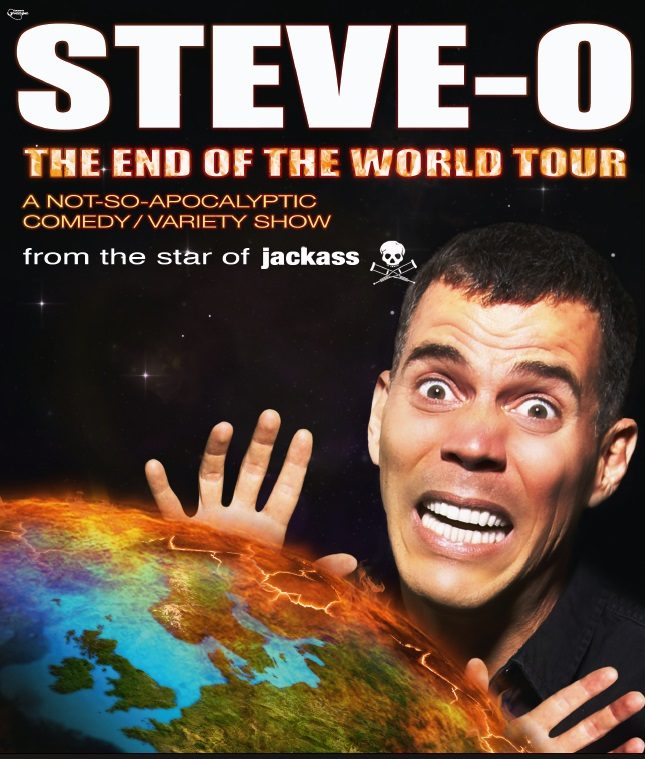 “Stephen Gilchrist Glover, better known as Steve-O, knows a lot about pain. The comic stuntman, who found fame on MTV’s slapstick sideshow Jackass , says it’s hard for him to rank the most dangerous or painful stunts he’s done for the show, his DVDs and his YouTube channel because there are so many different kinds of pain. He’d have to subcategorize them into groups such as head trauma, asphyxiation and burning.” – Danny Gallagher (Dallas Observer, 2016)

Steve-O: Stunter, comedian, actor, clown, activist, tv-star and the big star from tv-show Jackass. On the 19th of December he will come to Groningen with his latest stand-up comedy show ‘The End of The World-Tour’!

The comedian became instantly world famous when the first season of Jackass was aired on MTV in 2000. Johnny Knoxville and Steve-O were the original pranksters, performing various dangerous, crude, self-injuring stunts and pranks.
Steve-O’s post-Jackass career has included an appearing on the ABC series Dancing With the Stars and an increased focus on standup comedy, which had been a casual hobby for the past several years.

With his ‘The End of The World-Tour’ show he stays true to himself with a mix of funny stories, bar tricks and dangerous stunts. A night performed by Steve-O will feel like experiencing a rollercoaster ride!

Steve-O’s ‘The End of The World-Tour’ show will take place on the 19th of December 2016 at De Oosterpoort, Groningen.