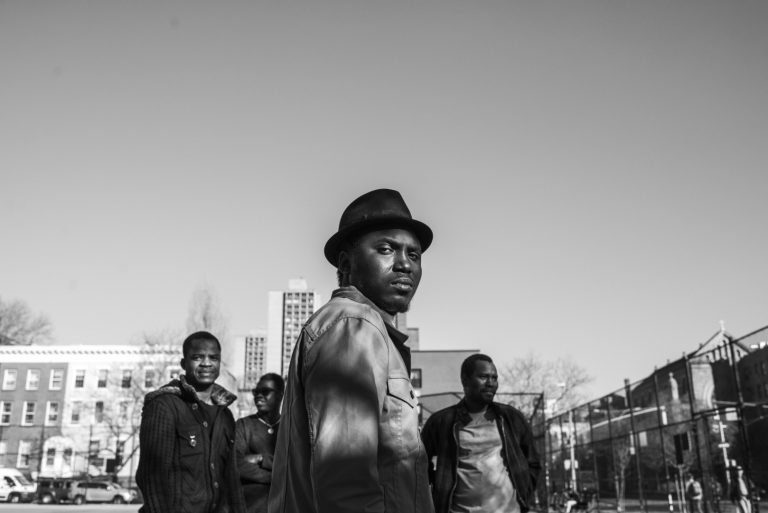 All those tired old ‘world music’ prejudices have no place when it comes to Songhoy Blues. The band consists of  four talented, hungry, sharp and outward-looking young men from a part of the world (Mali) that has had more than its share of pain and conflict in recent years. But it has given far more than its share of music and joy to the world in return over the past four decades. That place may seem strange, alien and ‘exotic’ to some, but deep down, Songhoy Blues are familiar proposition: four guys, guitar, drums, bass and vocals, driving rhythms, big hearts and a big story to tell.

Obsessed with hip hop and R&B – names like Tupac Shakur and Craig David pop-up readily – as well as bands like The Beatles, The Police, Bad Company and Jimi Hendrix, these boys have found a perfect way to mix the new with the old, home grown songs and dances of the Songhoy. They have incorporated both traditional styles like the takamba and the modern guitar-based sounds popularised by the likes of Ibrahim Dicko, Baba Salah and, above all, Ali Farka Touré in their more western-conventional sound. Blending the trad and the modern, the homegrown and the foreign, the youthful and the ancient became a mission of sorts. For Oumar, this clash of opposites has never posed a problem. “It’s more of a strength,” he says. “Because we never chose modernity. Modernity chose us. But we don’t just follow modernity; we plumb our ancient culture. We look, we listen, we research deep into things. That’s what gives us strength.”

With their second album ‘Resistance’ the boys will make a visit to Groningen, hoping to surprise their audiences with their rich, eclectic and musically adventurous sound. You say it sounds familiar? Course it does. It’s rock’n’roll. It’s the blues. Straight from the land where it all began!