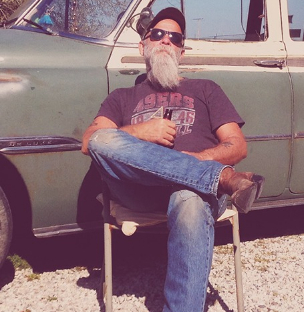 With his foul blues rock without any fuss, played on his singlehandedly made guitars, Seasick Steve (1941) sounds more vital than many young musicians. At fourteen years old, Seasick Steve decided to leave his parental home and lead the life of a hobo. He altered several jobs with (blues) performances. It didn’t gain him much fame, but he did share the stage with blues heroes such as Lee Hooker and Lightnin’ Hopkins in the sixties. All of a sudden, in 2006, the long years of messing about came to an end: the by then blues old timer released his debut album ‘Dog House Music’ and was invited by Jools Holland to perform during the highly popular BBC New Year’s music show ‘Hootenanny’. After the Jools Holland show he played at all the biggest festivals and recently performed at a completely sold out Albert Hall.

By now he has released several albums and March 23rd his new double album ‘Sonic Soul Surfer’ is released. The ambitious album is produced and written by Seasick Steve himself, together with his drummer Dan Magnusson. Seasick Steve treads new waters by combining new styles with one another. In his shed he also made a unique homemade instrument for this album. Sunday September 13th you can see and hear him live in De Oosterpoort!