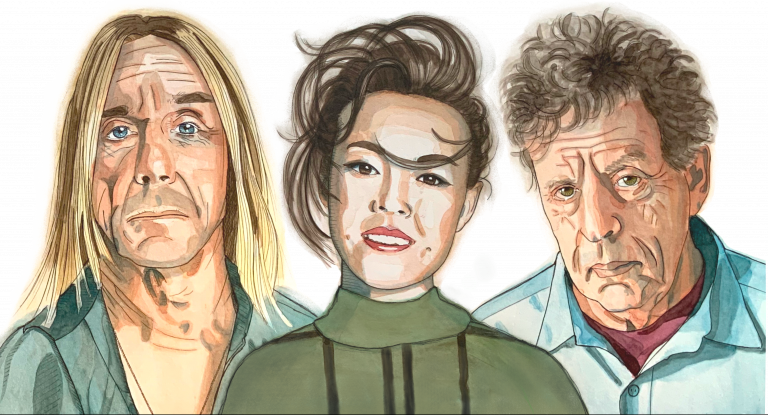 “It is a great disappointment that precautions against the spread of the Covid 19 virus have resulted in the postponement of our upcoming tour in The Netherlands for a shared evening with Philip Glass, Iggy Pop and Lavinia Meijer scheduled for June 2020.  As all of the artists have complex touring schedules, we are working on exploring possibilities for 2021.”

Philip Glass, Iggy Pop and Lavinia Meijer are coming to Groningen together for a very special show. An evening with spoken word by the godfather of punk and music from the well-renowned American composer known for among others The Hours, Glassworks, and Einstein on the beach. A surprising combination of three internationally acclaimed artists with various musical backgrounds who find each other in their passion for music and poetry.

It is the first time these three artists are on stage together with their own show. Spoken word recited by Iggy Pop with his characteristic deep voice, the sound of Lavinia’s innovative harp play, and the world-famous music pieces of composer Philip Glass come together in this unique show. Enjoy an evening with Philip Glass, Iggy Pop and Lavinia Meijer in De Oosterpoort on 9 June 2020.

Harpist Lavinia Meijer performs solo concerts all around the world, from Carnegie Hall in NYC to the Seoul Arts Center. She is one of the most-innovative musicians of our time and has worked with Glass multiple times. Lavinia rearranged his Metamorphosis and Etudes, among other pieces, for harp and released an album with her own interpretation of music from the film The Hours, composed by Philip Glass, in 2012, which gained Platinum status.

Iggy Pop: the legendary American singer, songwriter, producer and actor, Grammy Award winner (Lifetime Achievement Award 2020), and, with his band The Stooges, 2010 Rock and Roll Hall of Fame inductee. Iggy Pop is generally considered one of the most-dynamic artists ever and was one of the first to bring both ‘70s’ punk and ’90s’ grunge to the stage. He has built a legendary career and is admired by both critics and the cult scene. Iggy Pop is a music innovator with a very diverse portfolio whose collaborations span the entire musical spectrum, including David Bowie, Josh Homme, Goran Bregovic, Alva Noto, and currently Sarah Lipstate and Leron Thomas.

Philip Glass, born in Baltimore, Maryland, graduated from the University of Chicago and the prestigious school for music Juilliard. Around 1974 he started a number of innovative projects that have yielded an extensive collection of new music for The Philip Glass Ensemble and the Mabou Mines Theatre Company. The absolute highlights of this period are Music in Twelve Parts and the historical opera Einstein on the Beach, for which he worked together with Robert Wilson. Since Einstein, Glass has added music for opera, dance, theatre, chamber ensembles, orchestra, and film to his oeuvre. His music has yielded him Oscar nominations (Kundun, The Hours, Notes on a Scandal) as well as a Golden Globe (The Truman Show)

Glass’s more-recent work includes an opera about Walt Disney, The Perfect American, Glass’s memoir Words Without Music, published by Liveright Books, and Symphony No. 12,  an addition to his three symphonies based on David Bowie’s Berlin Trilogy. Glass received the US National Medal of the Arts from President Barack Obama in 2015, the 11th Glenn Gould Prize in 2016, and the 41st Kennedy Center Honours in 2018. He also keeps performing solo piano and chamber music evenings with world-renowned musicians and regularly plays with the Philip Glass Ensemble.

Lavinia Meijer met Iggy Pop and Philip Glass during a show in Carnegie Hall in 2016. Philip Glass is not only known for his music for opera, film, own compositions, and collaborations with several artists (such as Ginsberg, Woody Allen, and David Bowie), he is also praised for his ability to bring artists from different genres together. This has resulted in this collective initiative of these three artists.

An evening with Philip Glass, Iggy Pop and Lavinia Meijer will be performed in a select number of concert halls in the Netherlands. Ticket sale starts on Friday 24 January.