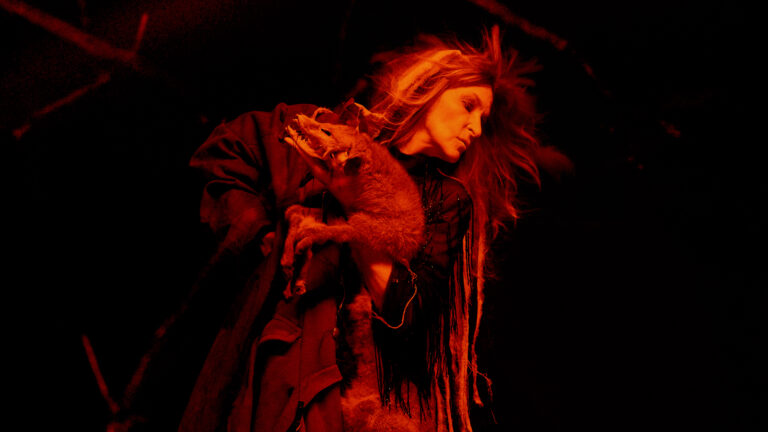 What happens if Macbeth is no longer the hero of his own story?
Macbeth is the archetypal alpha male. But the original play’s horrifying cocktail of war, murder, and lust for power conceals another important idea: nature rebelling against incessant human violence. Images of horses, ravens, dark woods and witches occur again and again, but only in the background.

This reworking of the original is the Dutch debut of German directors Jana Vetten and Jan-Christoph Gockel. It asks what happens if you take Macbeth out of Macbeth. The removal of the tragic hero strips away the classic plot structure of the tragic hero’s journey, and leaves space for all the other things left outside the play’s spotlight, like witches, nature, and animals. Why, from a contemporary perspective, should we keep putting the archetypal bad guy on a pedestal?

The intuitive dramaturgy creates a subjective experience in which we can interpret the piece ourselves, without being forced to see everything in purely rational terms.

EXIT Macbeth is a visual, physical, interdisciplinary production with an absurdly humorous twist. Michael Pietsch has used stuffed animals to make unique puppets, which are brought to life by the NITE ensemble’s dancers and actors. This is the first time that they have been operated by players on the stage rather than by Pietsch himself. The result is a radical, highly visual and interdisciplinary rethink of the original play.

Vetten, Gockel, and Pietsch have worked together several times on adult pieces in which puppets play an important role. Each time, they seek new ways of breathing the power of life into dead material, which is what puppet theatre actually is, and giving it dramatic meaning that depends on the subject. In EXIT Macbeth, the symbiosis between animals’ and performers’ bodies plays an important role: who is whose boss? And can we infuse new life into something that we humans have killed or destroyed? It is these artists’ interdisciplinary way of thinking about movement, theatre, and puppetry that has led Noord Nederlands Toneel to work with them.