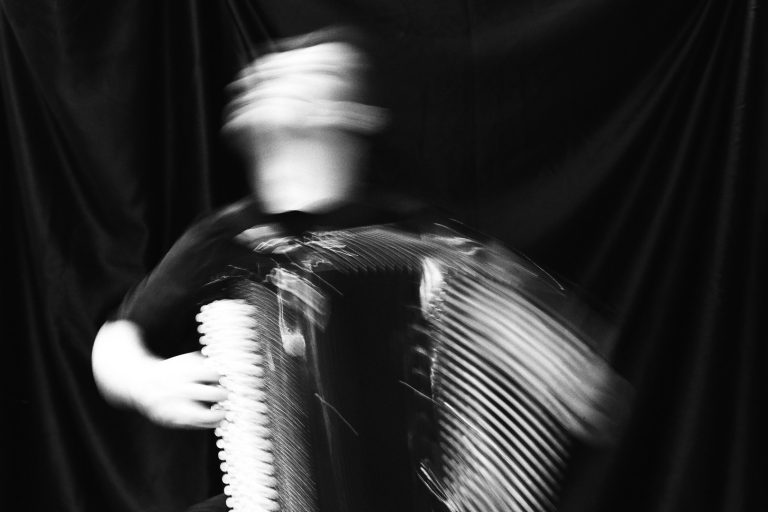 “I chose the path of greatest resistance for my music voluntarily”, admits Mario Batkovic. Batkovic is a Swiss, Bosnian-born accordion player who’s on a mission to expand the possibilities of the instrument to its very outer limits. Through the accordion he’s been able to channel an unbound desire to explore and express, a freedom that he has been denied through the various physical, social, cultural, and political borders that have existed in his life.

The longest road is often most rewarding, and through Batkovic’s restless searching and anarchistic approach to accordion music, he’s carved his own place as an indefinable but intoxicating musical entity. His music criss-crosses between classical and contemporary, often featuring many classical cadences and harmonies, yet is also interlaced with less conventional sounds by using the instrument percussively and draws from minimalism.

When Geoff Barrow (Portishead) was introduced to Batkovic’s music, he immediately realised both its musical and technical proficiencies, as well as its sheer uniqueness. Batkovic was subsequently invited to support Beak on their 2015 tour and then signed to his record label: Invada.

Batkovic presents a holism in his music that draws on the full capabilities of the instrument. This is reflected in quite a staggering range of pitch, volume and timbre that the instrument is able to produce, something that Batkovic exposes gloriously for the first time ever. However there are also subtleties in the production of the album that also make it a technical and aesthetic triumph. Batkovic wanted to translate the true sound of the accordion for the audience, in terms of representing exactly the way it sounds to him while he’s performing. It took over a year to solve the problems regarding the audio engineering of the album, but this now means that the stereo image opens up a whole new sonic spatiality, immersing the listener in a vivid and intricate sound-space.

“I wanted all of the instruments breathing, air noises and the sounds of flapping of claps to be audible. So the handicaps of the accordion can be transformed into benefits, creating a new sound”