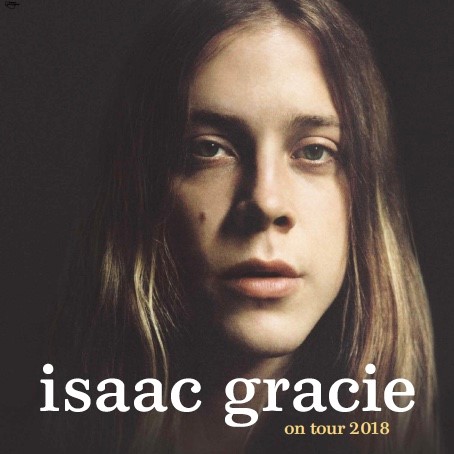 Support I Am Oak (solo)

The 23-year-old British singer-songwriter Isaac Gracie will return to Groningen. Although he only just broke through, he has already been compared to Jeff Buckley. This happened after Isaac uploaded his gentle, Dylanesque song Last words on Soundcloud in 2015. Since then, the life of the much-praised Gracie has turned upside down and he has gathered fans all around the world. Following his ESNS performance, he comes to De Oosterpoort for an intimate spring concert on 13 May.

Heavenly beautiful melodies
Isaac Gracie grew up in Ealing, as son of a poet. It thus comes as no surprise that he wrote his first songs when he was 14 years old. Inspired by the Buckleys, Radiohead, Leonard Cohen, and Bob Dylan, he developed an instinctive dexterity in writing heavenly beautiful, heart-breaking melodies.

Chameleon amongst singer-songwriters
He developed his lovely mystical voice through years of practice as a choirboy in the Ealing’s Abbey Choir. Young Isaac Gracie’s sound is still raw, but he definitely is talented. He has already been described as ‘England’s most astonishing and talented songwriter’. Isaac is the chameleon amongst singer-songwriters. Without musical education, he familiarised himself with several techniques and it is therefore difficult to characterise his music.

Personal songs
A remastered version of Last words, which was produced by Isaac Gracie himself, was rereleased on 21 February. You have probably also heard his sensitive track Terrified, which has been played regularly on NPO Radio 2 and 3FM. You do not have to know Gracie through and through to love his music; his personal songs even appeal to total strangers.

Isaac Gracie
Culture critics also describe him as ‘a poetical being, with a timeless, angel-like sound’. Isaac Gracie is ready to conquer the world, but not before he has performed in De Oosterpoort.