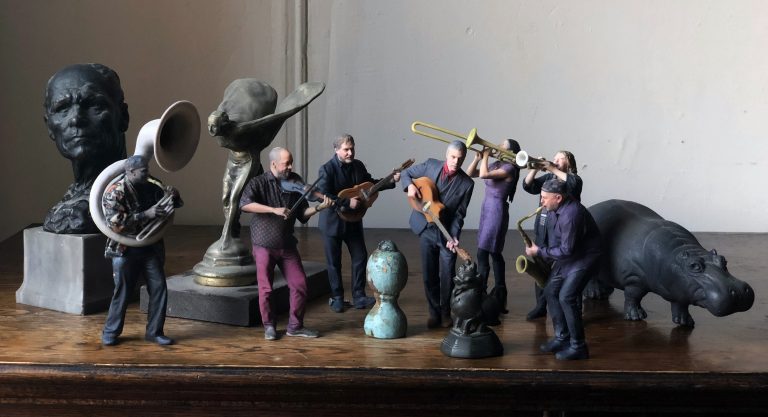 New York-based band Hazmat Modine uses a great many instruments to play a striking mix of genres. On Wednesday 19 June this seven-piece formation brings a new album to De Oosterpoort!

The band was founded in 1990, on the initiative of multi-instrumentalist Wade Shuman. During its long career, Hazmat Modine has worked with artists as Bombino, Kronos Quartet, The Cat Empire, de Gangbé Brass Band, and Natalie Merchant. The band gained worldwide fame in 2006 with its debut album Bahamut. Its title song was used in Wim Wenders’s 3D film Pina.

Around the world
During the last ten years, Hazmat Modine has seen a lot of the world. The band toured from Southeast Asia to Colombia, from Brazil to New Zealand to Europe and everything in between. Its music is inspired by the American music of the ‘20s to ‘60s. It can be described as a mix of blues, country, rhythm & bass, rock & roll, jazz, gospel and world music. Hazmat Modine’s songs always have a rough and mysterious edge yet simultaneously sound familiar and new.

Hazmat Modine is busy working on its new album Box of Breath. On this album the band is occupied with questions concerning humanity and mortality. With Wade’s characteristic voice and harmonica and among others a sousaphone, classical wind instruments, several strings and vocal harmonies, this album is an exciting collection of traditional American ensembles.

Hazmat Modine’s concert on 19 June will centre around Box of Breath!