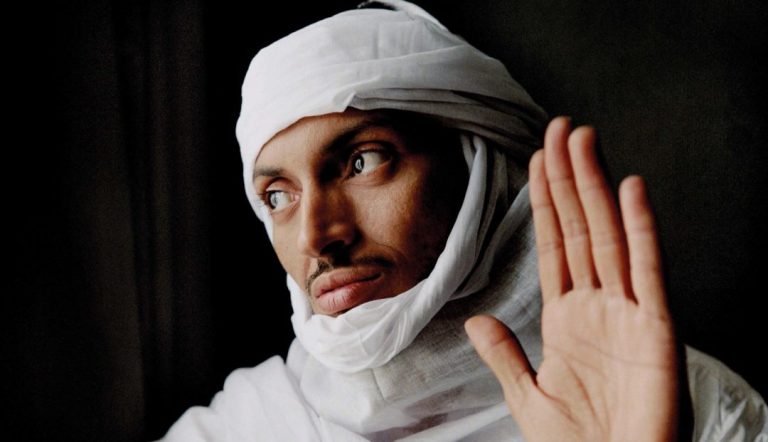 Whereas it is likely to be drizzly outside late October, it will be hot in De Oosterpoort. When guitar virtuoso Bombino is in town, the temperatures will rise to Sahara levels here. Noisey, which is starting to be the main international music platform, recently declared him the best guitarist in the world and this spring The New York Times said: “An ecstatic crowd jammed the dance floor of the Brooklyn Bowl to see one of the world’s greatest guitarists.”

Tuareggae
Omara ‘Bombino’ Moctar, a Niger-born Tuareg, masterly combines western blues and rock music with authentic African and Arabic rhythms as well as Caribbean sounds as reggae. The result is a combination of raw desert blues (as we know from his fellow musicians Tinariwen) and virtuosic guitar play, comparable to greats as Jimi Hendrix, John Lee Hooker, and a hint of Carlos Santana. This mix is also known as Tuareggae and it is shimmering, irresistible, sultry, and ‘electrifying’, according to English reviews.

World star in the making
Keith Richards features on his album ‘Agadez’, which was his international breakthrough. Robert Plant is one of his biggest fans and regularly asks him to be his support act. Black Keys’ Dan Auerbach is so impressed that he produced Bombino’s generally-praised album ‘Nomad’… Do we have to say more!

New album ‘Deran’
His new album ‘Deran’, which can be translated as ‘best wishes’, was released in May this year. If you wish yourself the best, buy a ticket as soon as possible, because: “A new album of Bombino is always a cause of celebration. The result is traversing of 60 years of rock and blues history, often within the span of a single song.” (Noisey*****)