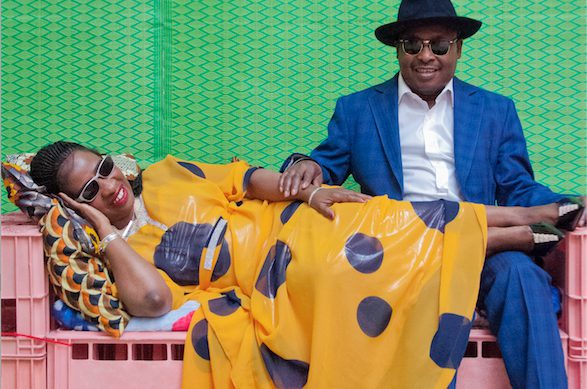 The blind couple from Mali

“But really, if you trusted your senses, you could have discerned the human presence there all along – in the intricate interplay between the musicians, the extraordinarinessy of their story, and most of all, in the lusty “yeah …” with which Doumbia finishes every song.”

Amadou & Mariam’s music can best be characterised as poppy afrobeat, combining traditional and electronic music into a sensual and danceable style.

Singer Mariam Doumbia and guitarist Amadou Bagayoko are well-known as ‘the blind couple from Mali’: a nick-name they have gotten because of both artists’ blindness. They met each other in 1974 at an institute for blind youth. Since the 80s they are performing together: the first years mainly in Africa and France, but later also at world music festivals across the world.

The duo booked great successes in Mali and got international fame with their hit ‘Dimanche a Bamako’, produced by Mano Chao. World tours followed, as did co-productions with bands such as Coldplay, U2 and David Gillmour & Johnny Marr. Amadou & Mariam also performed at the Nobel Peace Prize ceremony Obama attended and played at two opening ceremonies of FIFA world cups.

On Monday October 16, Amadou & Mariam make a visit to De Oosterpoort. Get ready for a night of wonderful world music that will surprise you!