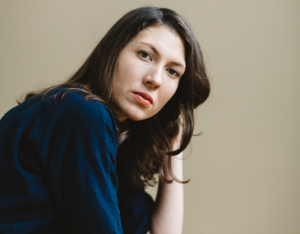 On Thursday 1 November Alela Diana will fill De Oosterpoort with her introvert and wonderful songs. Her pleasant psychedelic folk is considered part of the New Weird America, as are the songs of her good friend Joanna Newsom. It thus promises to be a lovely campfire evening, with a twist.

Dreaming away
Dreaming away in the kitchen listening to her dad’s guitar play: those are the first memories of Alela Diane (1983). The Californian singer-songwriter and guitarist taught herself how the play the guitar by writing songs and she still keeps returning to her father’s fingerpicking style.

Heart and soul
At the age of nineteen she released her self-produced debut album ‘Forest Parade’. This already showed some of Diane’s great talent, yet with its successor ‘The Pirate’s Gospel’ she really established her name. Its compelling tracks found their way to a large audience. “A campfire folk gem perfect for the summer festivals. (…) This is an album with heart, soul and, above all, originality”, according to NME.

“Courageous and vulnerable”
Alela toured ten thousands of kilometres through Europe and the United States by now and has become an experienced artist. Her songs are about life, about love, loss, nostalgia, happiness. She performed both solo acoustically and with a merciless band, as well as everything in between. Her fifth album ‘Cusp’ was released early this year, on which Diane sings about the birth of her child, motherhood, and femininity. She could not care less about the unwritten law that those are not subjects to sing about. This resulted in “a courageous, wonderful, and above all vulnerable album” (Written in Music ****1/2).