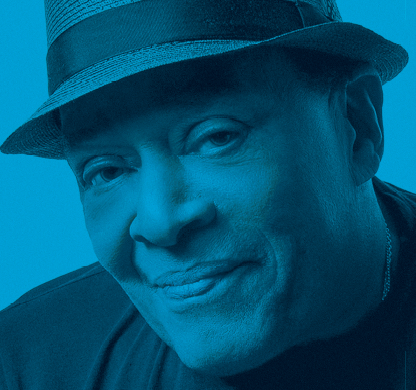 Al Jarreau, the American jazz and pop legend who scored fine hits as ‘Roof Garden’, ‘Boogie Down’ and (his irresistible version of) ‘Take Five’ with his striking singing style. The singer, born in 1940, performed countless concerts at jazz festivals all over the world.

Alwyn Lopez ‘Al’ Jarreau (Milwaukee, Wisconsin, 12 March 1940) is an American jazz and pop singer. Al Jarreau is known for his often improvised scat singing and his ability to imitate musical instruments, for example guitars and percussion instruments, with his voice. Jarreau is the only singer who won in three categories of the jazz-pop and R&B polls and he won five Grammy awards as well!

He is mostly known for his major hit ‘Roof Garden’ in the 1980’s. He started his career as early as the early 1960’s as a singer in a trio with amongst others pianist/producer George Duke. In 1975 he was discovered by a Warner Brothers’ talent scout. The album ‘We Got By’ was released in that same year. Critics received this album positively and it yielded him international fame. His second album ‘Glow’, released in 1976, did well too. Al Jarreau really broke through with his third album ‘Look to the Rainbow’, released in 1977, which contains among others his interpretation of ‘Take Five’. ‘Breakin’ Away’ (1981) is his best-selling album. It contains the hit ‘Roof Garden’ and the song ‘We’re in This Love Together’.

In 2008 Jarreau performed at the North Sea Jazz Festival in Rotterdam and was awarded with the Edison Lifetime Achievement Award. On 27 November he will perform, together with the Nord Deutsche Rundfunk Big Band, in Groningen!